A downloadable game for Windows

The fast-paced mix of RPG and 2D fighting game returns in Beatdown Dungeon: Demon Day! After the events of the first game, Nitro and his friends are stuck in the demon world and have to fight their way through the otherworldly town of San Fiasco. Can they make it home to the human realm?

Keyboard controls are supported, but PS4 or XBOX controllers are recommended.

Any and all feedback is welcome! This game is still in development, so changes can still be made. If you run into any bugs, please report them!

The press_kit_demo1_6.zip folder contains logos and character artwork if you want to cover the game. No need to download it if you just want to play the game.

Beatdown Dungeon is a creation of Phil Airdash. Further credits can be found inside the game.

Download and unzip the bd_demon_day_demo_v1_6_1.zip folder. Navigate inside and run the Beatdown_Dungeon_Demon_Day.exe file. That's it!

Picked up the game not long ago, super fun, loved the single-player, can't wait for more!

Just picked up the game a bit ago and im already finding extremely enjoyable gameplay. Can't wait to see the finished product.

This game is mad fun. I was looking for a break from Street Fighter etc. and this filled the void. The artwork and animation are  awesome to look at. The characters are fun too.

Thank you for playing, great to hear you had a good time!

Sup, the game is great and after getting used to certain changes with chars (Mostly Marv, cuz his low light's even slower now and I swear his special grab has a longer startup, but super armor's on heavy, his DX move's great, the Def Up badge got buffed, there's vampirism badge, and he has a backdash, so it's got good stuff too) I can say it's amazing, as with the first.

Aside from the Marv things (I dislike the grab nerf especially) I have some other things I thought I'd note (Warning, most are criticism):

Shirley got slapped hard, but I don't think any of her other stats besides ghost cooldown were changed, making her a lot harder to make do with (I'll admit it's far better than infinite Shirley, but it's still a bit cruel)

Marv I mentioned, and while I hate the Grab nerf, I'm quite a fan of the aforementioned badges on him, as Vampirism makes it infinitely harder to keep the Marv's health anywhere near the red, and the buffed Def Up badge makes it harder to put him down there in the first place. Instant Car is, and will always be the funniest thing ever, because saccing 25% mana for instant Super Armor is always worth it (Unless they block, then ur gettin punished)

Thundyjack, my new main, is pretty great, with a safe anti-air in mid, para bombs, and a super cool mechanic that makes playing safely especially rewarding provided ur spacing is good (Or u have Rusty Bebop) Only qualms I have are that his low light goes nowhere and his low heavy is not only high startup, but also extends ur hitbox before its hitbox comes out, meaning that most times it's used it'll just be punished before anything can happen and its startup is so long that it's hard to combo into without just getting blocked

Satoshi is the last char. I like how u changed his heavy to have an entire heavy combo, tho it did take a lil getting used to. I also think that u upped Dark Twister's startup, cuz it seems p hard to put it... Anywhere rlly, but I was never that great at Satoshi so who knows

And since thaz over I would like to ask if we could get a VS AI mode in case none of our friends are around/wanna do stuff (Ig there is the Campaign, but still it ain't quite the same, ya know?). Also, sorry for the immense length of this thing, and sorry I didn't put much positivity in it, but this is my essay on Demon Day Ig

I wrote a whole-ass essay, lol. Still, as mentioned at the start it's pretty great. I just happened to mention all the stuff I dislike for the most part, as well as some Marv stuff and ofc a Thundyjack review, cuz I love playin that manz

Hey there! Thanks for the extensive feedback! Everyones light and medium moves received a few more startup frames compared to the previous game, if I recall correctly. That's why Marv might seem a bit slower. I increased his walkspeed a little though. Glad you like Thunderjack! Creating new characters is always a gamble to see if they work out in a match as well as you had intentioned. VS AI mode is one of those "nice to have" features that I will consider once the main campaign is done.

do you plan to add netcode and old helpers?

Netcode is unfortunately not planned, since it's kinda outside my scope. Most of the old helpers will return, I just included the most popular ones in the initial build.

this game is so beatiful and awesome, i loved the game and the art

Thank you very much! Lots of time was spent on the visuals, so I'm glad you're enjoying them.

Overall nice game but personally, I kind of want badges and helpers to be just a bit more powerful.

Either that or being able to equip more badges in VS mode and not just in the campaign. I think something like hollow knight's charm notch system for the helpers and the badges could be cool, preferably including hollow knight's overcharmed debuff's banes and boons as well. By having limited notches (separated into badge notches and helper notches) and each helper and badge taking up a certain number of notches, you could balance more powerful badges and helpers by giving them high notch costs while making weaker badges and helpers costs less but be balanced by allowing players to equip more badges and/or helpers.

Also with regards to 1 particular badge, the step dash feels kind of useless . Maybe add dash cancel or dash block functionality to it?

Lastly, I just want to see a badge for airdash break. No other game besides chaos code has it ATM to my knowledge and GGST removed it in the recent beta. This is completely a selfish request though.

Hi! Thanks for playing! There actually were plans to allow for more than one badge in Versus Mode, but I shelved them pretty quickly. Having something like a ratio system for badges is a neat idea, but the problem is that certain badges combine better with certain characters/helpers. The poison badge for example is really strong when used with Traude, but less so with others, so defining the cost of a badge would be really tricky. How does airdash break work in CC? I actually really like that game.

Yeah, I forgot to consider how some characters benefit more from certain badges than others...

Anyway, unlike a traditional air dash where the your character travels a fixed distance before you are allowed to attack, air dash break allows characters to attack at any point in the air dash and cause them to fall immediately as soon as they attack.

I'm not sure if my description is clear enough so here is a video of Novriltataki explaining the airdash break mechanic using footage from the previous GGST beta.

The above example is only for the forward version from GGST  but Chaos Code allowed it to be used in both directions so it was used a lot in neutral and mixups and I really like it as I think the mechanic is really cool but it's also really strong so don't feel obligated to include it if you think that it'll be too strong.

That actually sounds like a really fun feature. However most air attacks are designed to be used during a full horizontal airdash. The closest that might work for you is the Quick Drop badge. It allows you to interrupt jumps by pressing down and effectively doing KOF shorthops.

...I don't really have any combo's, maybe add more to the combo system? Like, make it UNIST based? Without really any combos, It feels empty. More advanced combos, please...

Hi! The game has a pretty straightforward chain system, but without reverse beat like in UNIST. Are you using your helpers? You can cancel most attacks into an assist call and extend combos that way. This game also focuses on juggles: try to get your opponent airborne via sweeps and launchers and don't let them drop. Again, helpers and certain badges can help with this. Hope that helps!

So the neutral is Melty Blood styled. I wish there were more ways to combo on the ground.

I fully enjoyed the demo and look forward to the next!!

Thanks! I'll keep at it

Hey man. I just loved to play the game. I loved the creative character designs here. I took a chance to upload my gameplay on my channel. That's cheered me up to play the first game right now. Congrats, and may come the next games of the series.

Thank you for the kind words! Cool to see a full playthrough of the demo, video feedback is always very helpful. Hope you enjoy the previous game too, dispite some jank xD

It’s back boys. And better than ever. Button config on character select? Mwah. Beautiful. Reworked characters, a better training mode than SFV, some boppin beats for the soundtrack? Word? WORD? This is indie dev superiority at it’s finest. What’s next? GGPO rollback netcode? Can’t wait to see what’s next, this game is awesome, and already a big improvement on the previous installment.

Thank you, great to see people enjoying the game! The first game got way more players than I anticipated, which is why I put more effort into features like training options and such. Even has hold start to pause for versus matches now! I actually put some time into researching rollback, but the game's foundation was not built for it and it's a bit above the scope of this project. I will focus on completing the campaign for now. GGPO would be really cool though xD

Hi, I would love to translate your demo for free, if you are interested please text me to my Discord: Kuri Videos#4398

Nice! Thanks for the shoutout

There was a lot to improve from the first game, so a sequel was in order!

Cool, you made a video, that's awesome! Need to watch this later

I really love the game keep up the good work!!

Thank you! I'll keep at it!

No problem man. If you need a beta tester I'm here for you 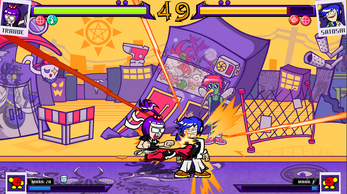 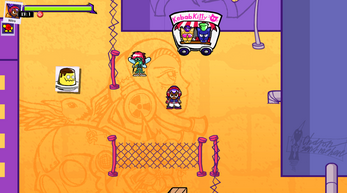 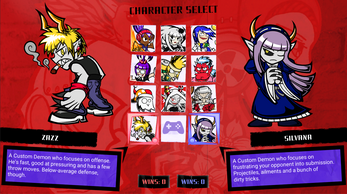 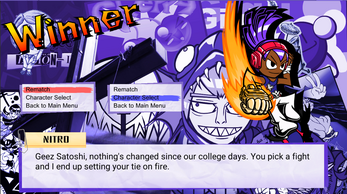